Let me start with a correction. In my last post I used the word hijab when I meant head scarf. I know better, and have been corrected on this in years past by feminist Muslims, but somehow following the media attention around that incident I slipped and used the term hijab that the mainstream media uses. As a translator I loved this explanation of why this is a dangerous slip that supports conservative and anti-woman interpretations of the Koran, as do, the Muslim feminists authors argue, naive empathy experiments to 'walk in her hijab'.

But last week there was a very different, and inspiring, moment of wearing a head scarf in solidarity. Al-Shabab militants, who regularly single out Christians and kill them, pulled over a bus in Kenya. The Mulsims on the bus risked their life by quickly handing head scarfs to the women and helping them to wear them properly so that they could not be singled out. THAT is some brave and powerful head scarf solidarity. 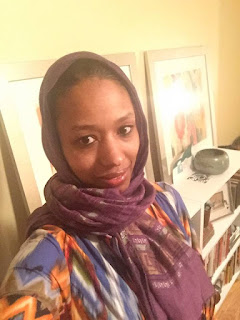 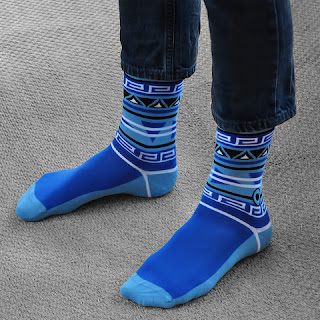 The socks in the picture here are marketed as "Syrian refugee crisis socks" by stand4socks. Your purchase of the socks funds one week of education in a refugee camp. Another model will fund the clearing of two square meters of land from landmines.

I am generally dubious about showing solidarity through consumption. Our planet needs dramatically less consumption, not excuses to justify more.  You probably already have way more socks than you need (I sure do). Why not donate a pair of winter socks to your local group organizing to set up house for one of your local Syrian refugee families? Not connected to one of those groups yet? Look for one, there are plenty. Quaker Meetings and Unitarian churches are a good place to start if you don't know where to look.

Let's stand in solidarity with Syrians in more transformative ways than through buying, or even donating, socks.  What will do more to change the situation for Syrians is asking the hard questions about why the war is raging there, and working to end the bombing of civilians in Syria that is making things worse and only serving to recruit more and more fighters for ISIS.

Nonviolent organizing for peace and justice continues in Syria, under incredibly difficult conditions. We can stand in more meaningful solidarity with those brave activists by following and sharing the stories posted on facebook by the Syrian Nonviolence Movement. Another resource is the site Syria Untold. I would love suggestions of other sites and ways to support this organizing.

Update: Another site recommended to me by Ebru Ustundag is the Syria Solidarity movement, but note that they support the Syrian government and the Syrian Army, so not exactly nonviolent grassroots organizing. Still, it's a perspective on the conflict that is not widely available in English.

I was quite moved this morning that the whole front page of the Toronto Star is a large and warm welcome to Canada for Syrian refugees, the first full official planeload of whom are arriving today.
One of the issues here in Canada is how this will affect First Nations here. Ebru also recommended this podcast by native activists. As they describe it, "Trudeau announces nation to nation relationship and then proceeds to invite 25,000 Syrian refugees to come live in this land without consulting any Indigenous nations. We tackle this contentious topic on a late night ramble in the truck."
No comments: