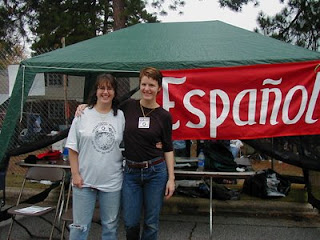 For the last several years at the big annual vigil to close the School of the Americas (US army school that trains Latin American military officers) as the votes in Congress have gotten closer and closer we've said - this might be it! this might be the last vigil!

Well after this last election I certainly hope so! Of course, it's a symbol, and we will find some other symbol of US militarism to focus on next, but I'm going to miss this version of the struggle, and I'm sad that I'm in Colombia right now instead of in Georgia, where thousands are gathering this weekend in what is the largest ongoing protest against US Empire inside the belly of the beast, both in terms of numbers present and in terms of ongoing civil disobedience. I'm proud that as part of the interpretation and translation working group I've been part of building a diverse multilingual movement that draws on everyone's strengths and works to make sure we can all understand each other well. Much love and strength to the fabulous interpretation team there this year, especially Leo and Marcos that stepped up to the coordination! (the pic here is of Jenny and I, exhausted from coordinating but shining from the beauty of it all, in front of the tent where we handed out the radios, several years ago)

You can participate in the vigil virtually by signing the petition to Obama to close the school. There will be great photos of the vigil on the SOA Watch main page soon.