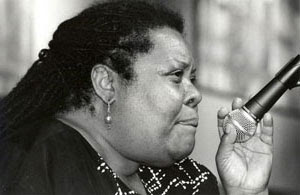 I was incredibly moved by the article It's important that we make connections in the latest issue of Presente! the newspaper of the movement to close the School of the Americas. The article is an interview/conversation with black freedom movement leader Ruby Sales. Ruby has personal experience with accompaniment. In '65 Jonathan Daniels, a young white man working with SNCC in solidarity with black activists, was killed as he pushed Ruby out of the line of fire of a white vigilante.

Ruby's analysis in this article is so powerful and clear. I really encourage you to read all of it, but here are a few key snippets:

(warning, disturbing stories - but we need to be disturbed! see through our tears!)

...
Ruby: No, it was a whole body of white people. For example in 1930 a lynch mob of men, women and children in Meriam, Indiana mutilated and lynched Tom Ship and Abe Smith and lynched them. And they also burned their bodies, and then after their bodies were burned, white men, women and children tore off the victim's clothes and ripped apart their genitals to keep as souvenirs and reminders of their power over Black lives and bodies.

And then in 1918, a white mob lynched Mary Turner in Brooks County, Georgia. A mob of about several hundred people, and she was 8 months pregnant, and the mob tied her to a tree, took a knife and split her wide open and her unborn child fell from her womb to the ground, where the mob proceeded to crush the baby's head with the heels of other members of the mob. And then they riddled her body with bullets and set her afire with gasoline. And no one was punished for mutilating or murdering Mary Turner. And in the crowd, of course, there were policemen, and the policemen in these small counties knew exactly who had done it, and they never brought charges against them.

Most recently in 2007 in Logan County, West Virginia, Megan Williams was hospitalized after six white men and women held her captive and tortured her for days. They tortured her, they sexually abused her and forced her to eat rat droppings. They choked her with a cable cord and stabbed her in the leg while using white supremacist language designed to dehumanize her. According to Megan Williams, these white supremacists poured hot water over her and made her drink from a toilet. As of this writing, representatives of the criminal justice system both locally and nationally have decided not to charge 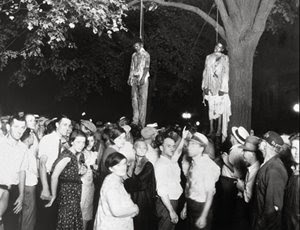 Megan Williams' torturers with these crimes.

And then of course we have the murders of Adolf Grimes, who was murdered most recently in New Orleans, where the police for no apparent reason at all pumped 14 rounds of bullets in his body. And of course we have Oscar Grant in Oakland/San Francisco, most recently, who was shot by the police as he lay on the ground with his hands cuffed. And we of course have Sean Bell who was shot multiple times by the police in 2006 as he came from a bachelor's party that preceeded his wedding the next day. And of course you have 17-year-old Billy Joe Johnson who died mysteriously in the hands of the police. And on the day that he died, the police would not permit the parents to identify or see his body. As a matter of fact, the parents did not see his body for five days later. And when they returned the body to the parents, Mr. Johnson said that his son had been butchered like a pig. And later on we discover that his brains, tongue and the right side of his jaw were missing.

Vera: It's an overwhelming history and present of --

Ruby: Well, it's like the death squads of Latin America. That's exactly what they did. They cut out people's tongues in El Salvador.

So this continues a trajectory of state violence against oppressed peoples, whether you're in Latin America [or not]. That was my thing, that people could make the connection in El Salvador, but they couldn't bring it back home to this country that has had a heinious history. The trainers of the death squads were able to teach them to do this because they had practiced it domestically at home. That's why they came to this country to be trained in how to commit these heinious crimes. Because this is what had happened in this country with African Americans, Native Americans and Latinos.

Vera: And because in this country, the state had this whole body of white people who were supporting them, either silent, and/or perpetrating it themselves.

Ruby: And when the Dyer Bill that came up in Congress against lynchings, that had been fought to bring to the national forefront by Ida Wells Burnett, most white Congressmen voted against the Dyer Bill. Voted against the bill to stop lynching in this country, and that was in the 20th century. That was not in the 18th century.

And I can tell you the story of Will Brown, whose body was broken and charred, after a white mob lynched him and hung his dead body from a telephone pole in 1919 in Omaha, Nebraska. They shot several hundred bullets into his lifeless hanging body. They then cut the rope and then tied his body to a car, and dragged it through the street. Next, they poured oil on his body and burned him. And once again, although the faces of members of the white mob are clear in the photographs, the white representatives of the criminal justice system that was sworn to uphold the law ignored the crime and no one was ever charged.

And what I'm trying to say is that this has always been a community event within white society. And white people have been told that this kind of blood letting and killing and lynching and torture of African Americans are essential to protect law and order and to protect the perogatives of the white community. That left untouched, Black people would destroy civilization and everything that's good in it. And so white people have been taught to fear African Americans. And they have most of the time bought into this.

Ruby: Well, one of the reasons why the movement here against death squads in El Salvador and the violence and terrorism in Nicaragua never gained hold among the African-American community here, because it rung with deep hypocrisy. We were living in the heart of police and state violence, and there seemed to have been on the parts of white people no recognition of this and no willingness to admit the truth about the country that they lived in and how their silence accelerates and sustains this police state that Black people have lived in for years. So it seemed weird to go running somewhere else without making a connection between that somewhere else in this community. And so Black people, when confronted with this situation, really saw white people as real hypocrites and that's why -- it's not that we didn't care about what was happening in Latin America, but we simply could not work with people who would deny what was happening in this country and who insisted on remaining ignorant about it. When there have been hundreds of books written on the subject.

So part of what I think needs to happen is that I need to bring young activists together in a kind of school, a movement history of militarism so that they can do their work within the context of a historical frame of reference. Because right now it's ahistoric.