decolonizing our use of photography 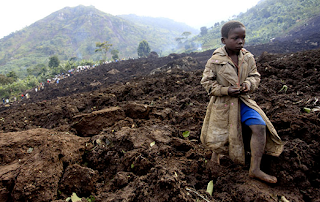 Caption: Bududa, Eastern Uganda. A boy walks over the churned mud after heavy rains caused landslides on Mount Elgon on Tuesday. Three villages were engulfed, at least 80 people were killed and around 250 are missing. The Guardian, 6 March 2010, p. 23. Credit: James Akena/Reuters

Photography is a powerful way to inspire solidarity, and I wish international solidarity movements used more of it, but it is also VERY easy for photography to unintentionally fall into colonial patterns in ways we may not see right off. Before you read on, stop and think: what patterns might the above photograph be falling into?

As David Campbell, one of my favorite geographers, put it: "The choices that Akena made in taking the photograph, and The Guardian made in making it the largest picture in its ‘Eyewitnessed’ double page spread for the first week in March, are evident when compared to other pictures from the same event. On The New York Times Lens blog Stephen Wandera’s photograph for AP (see slide 2) shows a large crowd at the scene searching for survivors, while a Ugandan TV report also shows the community at large. These demonstrate that the photography of the lone boy is a specific choice with particular effects that tap into a long history of visual representation.

It is time for the photographic visualization of ‘Africa’ to offer something different. ..One significant project doing this is Joan Bardeletti’s “Middle Classes in Africa,”...

The picture above just cracks me up. It's the little dog that gets me. In the rest of his post, David goes on to argue that it's not a matter of some pictures being right or wrong, or just thinking of it in terms of positive or negative photos, but aiming to not perpetuate cliches, like "lack and absences in ‘Africa’" and that instead we should aim "for a more complex, self-aware, form of ‘positive’ photography". Not sure that this exhibit of African women leaders by Bono's One organization fits that bill.

I went to a seminar in Sydney today that focussed on the question "why is the global face of povetry a woman's?". It was partly presented by the international NGO ActionAid, and there was a tall ActionAid banner behind the speakers featuring a skinny, apparently African woman, standing side on with her baby in a papoose. The opening image of the seminar (chosen by the seminar's organisers) was an apparently Indian woman, also very skinny, drinking chai while her baby breastfed. The discussion was nuanced and thoughtful, i.e. not as generic perhaps as the images. But I couldn't stop thinking about the presence of the two images in our discussion! What effect does this generically black, hungry-looking woman with her baby have on perceptions of first world superiority and such? Do I just think she's hungry because I have been visually conditioned this way via all the pitiful looking children on World Vision ads? Would we show an image of a white woman breast-feeding? I think these questions might be implicated in decolonizing photography.....