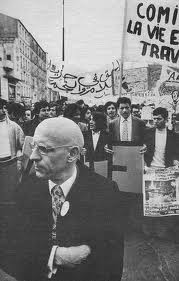 Thanks to Wes for pointing me to this, previously posted here.

We are just private individuals here, with no other grounds for speaking, or for speaking together, than a certain shared difficulty in enduring what is taking place.

Of course, we accept the obvious fact that there's not much that we can do about the reasons why some men and women would rather leave their country than live in it. The fact is beyond our reach.

Who appointed us, then? No one. And that is precisely what constitutes our right. It seems to me that we need to bear in mind three principles that, I believe, guide this initiative, and many others that have preceded it: the Ile-de-Lumiere, Cape Anamour, the Airplane for El Salvador, Terre des Hommes, Amnesty International.

1. There exists an international citizenship that has its rights and its duties, and that obliges one to speak out against every abuse of power, whoever its author, whoever its victims. After all, we are all members of the community of the governed, and thereby obliged to show mutual solidarity.

2. Because they claim to be concerned with the welfare of societies, governments arrogate to themselves the right to pass off as profit or loss the human unhappiness that their decisions provoke or their negligence permits. It is a duty of this international citizenship to always bring the testimony of people's suffering to the eyes and ears of governments, sufferings for which it's untrue that they are not responsible. The suffering of men must never be a silent residue of policy. It grounds an absolute right to stand up and speak to those who hold power.

3. We must reject the division of labor so often proposed to us: individuals can get indignant and talk; governments will reflect and act. It's true that good governments appreciate the holy indignation of the governed, provided it remains lyrical. I think we need to be aware that very often it is those who govern who talk, are capable only of talking, and want only to talk. Experience shows that one can and must refuse the theatrical role of pure and simple indignation that is proposed to us. Amnesty International, Terre des Hommes, and Medecins du monde and initiatives that have created this new right-- that of private individuals to effectively intervene in the sphere of international policy and strategy. The will of individuals must make a place for itself in a reality of which governments have attempted to reserve a monopoly for themselves, that monopoly which we need to wrest from them little by little and day by day.

correction, or perhaps addition, I've seen this cited elswhere as being a speech addressed to a rally of solidarity with the Vietnamese “boat people” in 1981, which makes more sense.