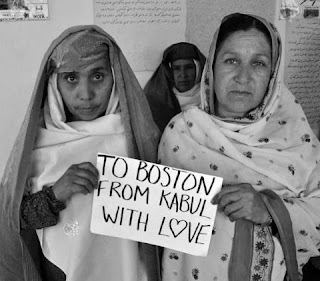 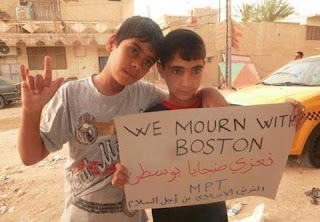 I have been getting lots of photos like these in my facebook feed.  The boys here are in occupied Palestinian territory and I assume that the photo was set up by the Michigan Peace Team, an international accompaniment organization.  It seems likely some English speaking internationals also set up the photo from Kabul.

These photos make me uncomfortable.  It seems so unfair that the bombing in Boston gets this much attention and solidarity from the places that are, at least figuratively, getting bombed BY Boston.  Of course I'm sure that's part of the point the folks in, and setting up, these photos are trying to make.  That all lives count, including theirs.

It's also true that when I was El Salvador during the war I went on a trip through an area full of huge craters from bombs paid for by US military aid, and the Salvadorans with me went to great lengths to reassure me that they understood that the US people were not the same thing as the US government and that they did not blame me, but rather appreciated my work to try and change my government's policies.  I have gotten that message again from people in war zones in Colombia.

So perhaps these photos could be read as a way of saying, even as your government engages in, or funds, a war against us - we distinguish you from your government.  We see you as human, and we connect with you, with love and grief.  We know this pain.  See us too.  Mourn with us too.

I dream of a world with a flicker feed of people from Boston with signs saying thank you, we too mourn with Kabul, and Rammalah.