solidarity can easily veer into saviorism

I am horrified by the kidnapping of the Chibok schoolgirls in Nigeria. I am disgusted that teachers asked not to hold the exam, because an attack was likely, and that the government insisted it go ahead. I am outraged that the government knew four hours before that the Boka Haram was moving in to attack and did nothing. I am sickened that the police and military are deeply corrupt in Nigeria, and ineffectual at protecting civilians. I am heartbroken that the parents found where in the woods they had been taken, and though they stayed there for some days, could not get a police response. I am saddened that impunity in Nigeria appears to be even more rampant than in Colombia, and criminals can engage in these sorts of acts knowing that it is extremely unlikely they will ever be brought to justice.  I am not surprised that the Nigerian president has used the #bringbackourgirls campaign to extend 'emergency rule' (the state of exception, suspending even the very limited protections that normally exist).

I am heartened that there has been an outpouring of global concern for the girls who were taken.  I am astounded at how quickly attention and concern can grow through social media and the pressure it can create.  I am worried that this pressure, instead of targeting the Nigerian government, has veered to pressuring the US, and will be used to support even greater US military involvement in the conflict, and in Africa generally (as the Kony campaign was - and apparently John McCain has called for the US special forces to go in even without Nigerian approval).  I am fearful that instead of negotiations for their release this campaign will lead to a military rescue by a deeply corrupt and dangerous Nigerian military that is likely to put not only these particular girls but all Nigerian civilians at greater risk of harm.  I am amazed at how few people in the US seem to realize that Nigeria is a major oil producer and thus a key part of the US's geopolitical chess game.

Without a clear ask for action, it is easy for the campaign to be misused for militarized ends. I was reminded by my compa William Payne of this quote:

"Compassion is an unstable emotion.  It needs to be translated into action, or it withers…  And it is not necessarily better to be moved.  Sentimentality, notoriously, is entirely compatible with a taste for brutality or worse."
-Susan Sontag (Regarding the Pain of Others) 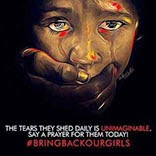 I am not surprised at how hard it has been to hear the actual voices of the girls and their families, and their specific asks for specific actions. Most stories don't even give a number of the missing (53 escaped, 223 were taken). The website chibokgirls was set up to encourage families to share the photos and individual stories of each girl. But it seems unlikely these families have the means to do that, or would want to since it is likely this would increase the stigmatization the girl will already face in her community once she is returned (since it will be assumed that she has been raped). So the website is left with no stories, and instead just this creepy picture representing each girl instead. Much better is this interview with school girls about what it's like to be a school girl in Nigeria - but note that they are in school in Lagos, which is quite different than the rural North in the heart of this armed conflict.  I have only found this one interview with one of the escaped girls, and it is literally very hard to hear her, it seems because of her fear though probably also because of the lack of an English interpreter - a key thing to have if you want to listen well to people who are afraid and don't speak English as a first language.

There has also been little analysis of the context in most stories. Have you read any stories about this that talk about how dangerous it is to protest in Nigeria? How frequently protesters are killed by the army? Maybe you saw one of the few stories about one of the mother's of the girls being arrested at a meeting with the First Lady - but she wasn't actually even one of the mothers, as often portrayed, but an ally who lived in the city and had been asked by the mothers to go to the meeting because the leader who was meant to go wasn't able to get through on the bad roads from Chiboke. She was released a few hours later when it was confirmed that she was not an imposter, but really?

And what about the context of the conditions all girls in Northern Nigeria face, where only 4% of girls finish school and it is one the areas with the most unschooled girls in the world? Or what about the massive environmental degradation across the country, thanks in large part to Shell oil? Meaningful solidarity requires some sense of context, and dialogue with and leadership from the folks most directly affected. Both of these seem in scarce supply on this campaign, and the huge outpouring of solidarity has frequently veered into saviorism.

As Teju Cole put it in his White Savior Industrial Complex article in reference to the Kony campaign, "If we are going to interfere in the lives of others, a little due diligence is a minimum requirement." He went on to say, "there is much more to doing good work than "making a difference." There is the principle of first do no harm. There is the idea that those who are being helped ought to be consulted over the matters that concern them. .... One song we hear too often is the one in which Africa serves as a backdrop for white fantasies of conquest and heroism."

But there are plenty of heroes in Nigeria, who are incredibly brave and struggle for justice even though it is crazy dangerous.  This has been an African led campaign, as you can clearly see in this tweetpic. And there are plenty of elder African statesmen that could negotiate a prisoner swap. Rather than saving, in the US and Canada we could be doing more powerful solidarity to support this work.
If the US government wants to 'help', I suggest it pressure president Jonathan to meet with the brave Nigerian women leading the campaign, and pressure the Nigerian government not only to effectively pursue the kidnappers, but also to end human rights abuses against its own people (like killing and arresting protestors, and not protecting school children). Perhaps the US could also offer funding and training to the legal system. But then, ending impunity is not nearly as sexy as sending in the special forces.

Amnesty has a petition for folks in the US to sign to pressure the Nigerian ambassador. I do appreciate that this is one of the few that goes beyond asking for their safe return to ask that they "ensure that all children are able to access their right to education in safety, and to respect, protect and fulfill the human rights of all Nigerians without discrimination." This petition by human rights first is to the US Defense Secretary, and says the  Department of Defense should partner with State and USAID to support anti-corruption, rule of law, and police reforms. It should also ensure that the United States is not allying with people complicit in the victimization of the kidnapped girls or other civilians. 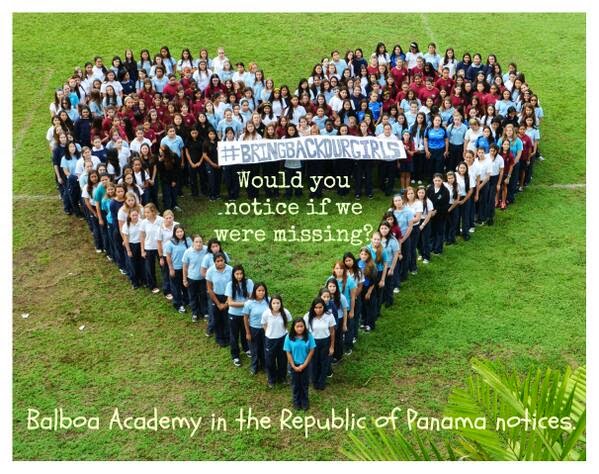 But still, I wish that the asks were more clearly coming from the women leading the campaign on the ground in Nigeria, that we could listen better and hear them and the escaped girls more clearly, and that the hashtag was connected to more context and less militarism.

But there is one critique of this campaign that has been circulating that I disagree with. Megan MacKenzie, amongst others, argues that ‘our girls’ implies ownership rather than solidarity.  I disagree, and am surprisingly ok with this 'our'. It does not feel appropriative or silencing to me, in the way that the various ‘I am’ campaigns have (I am Malala, I am Trayvon).  For the same reasons that I liked We are all Juan, I like #bringbackourgirls. I don’t think it implies that I AM their mother (or sister, or aunt), but that I am part of their larger community, and that I stand with them.