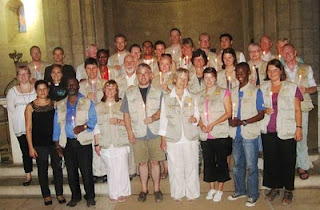 EAPPI has a one of the best "who we are" pages of any accompaniment group, here, with this photo (love the candles) and short bios of each of their current 36th group serving, made up of 26 accompaniers from eleven countries (Australia, Germany, Finland, Ireland, Netherlands, Norway, South Africa, Sweden, Switzerland, UK and the US). One of the Swiss accompaniers is originally from Colombia. His bio reads:

Originally from Colombia, Jorge has been living in Switzerland for the last 5 years. He has a BA in Psychology, a MA in Psychosocial Research and is about to finish his PhD in Neuroscience. He has researched stress, emotions and the psychobiological mechanisms related coping with chronic stress. Now he is interested on going from the lab to the field and as a EA he wishes to focus his efforts on the area of mental health in the conflict. As a Colombian, he is constantly mistaken for an Arab or Israeli, so decided to come and look for his roots!

Several of the EAPPI accompaniers have blogs, listed here with their bios. One recent intriguing entry is titled, Give young people a space - not a place - but sadly the rest of the entry is in Swedish!