Resisting the Space of Exception 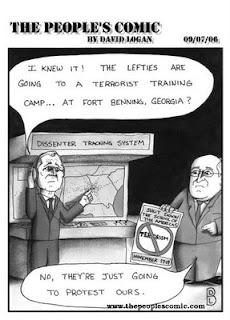 I have an article in the journal Antipode entitled

Cutting through topologies: crossing lines at the School of the Americas

Here is the abstract:

The School of the Americas (SOA) is a U.S. Army school that trains Latin American military officers. Manuals released detail torture techniques once taught at the school, and thousands of graduates have been linked to human rights abuses. The annual vigil in front of Fort Benning is the largest ongoing protest and civil disobedience against U.S. imperialism being held within the U.S.. The movement to close the SOA traces the twisted lines of the topology that shapes spaces of exception in Latin America. It traces those lines back to the SOA, and cuts through them with its own counter-topographical lines of connection to those Latin Americans that are made into ‘bare life’ by those topologies. This essay looks at the doings of protest space as a form of resistance to the space of exception, and how personal stories, and mourning, can put us beside ourselves, with one another.

I'm not supposed to post the pretty pdf version of this article, so if you don't have access through a university library and you'd like me to send you a copy, please ask me for it at sara at spanish for social change dot com.

The annual vigil to close the SOA is fast approaching - on November 21, 23. If you can possibly get yourself to Georgia, it is incredibly worth going to this beautiful inspiring gathering.
1 comment:

video for the people

There are some amazing videos about struggles for peace and justice in Colombia up on youtube. I've set up playlists of these in the sidebar - check them out!
No comments:

Saw this movie (preview above) tonight as part of the Bogota film fest. The idea is that it gives voice to folks who are generally unheard. It has fantastic cinematography and production values - much better than these sorts of things usually have. Not surprising given who all is involved. I particularly liked the piece directed by Wim Wenders, that had women from the DRC telling their rape stories and their images fading in and out while they were telling them. It works to remind you that you still can't fully see them, can never really know that sort of experience. I do wish that the folks shaping the story-telling, the filmmakers, had somehow been more clearly present in the film - in that feminist film sort of way. As it is, it appears too transparent. Still, a great project by Doctors Without Borders. Though I recently posted about my frustration with their style of solidarity, they seem better at doing the story-work of solidarity.

(The full movie is now online here)
No comments:

Empire and Solidarity in the Americas Conference

There is an amazing conference on solidarity coming up in New Orleans with a bunch of my favorite people presenting. I really wish it weren't so far for me to go. As well as the title above, it's being presented as "Rethinking Solidarity" - which is actually the title of a panel I submitted to the upcoming LASA conference. Plenty of rethinking to do, and this conference seems like a great place to do some of it.

The web site for the conference is here, and soon it should have copies of the papers, in case you can't go but want to read them.

Their description of the conference:

The inaugural Empire and Solidarity in the Americas Conference will examine the meanings, forms, histories, and futures of solidarity within the Americas. We are particularly interested in the intersections between North-South solidarity and labor solidarity, but especially between activists/NGOs based in the North and social movements and organizations in Latin American and the Caribbean. In the context of neo-liberal capitalism, what forms of cross-border alliances have labor unions from both sides of the divide established with each other as well as NGOs and solidarity groups? Likewise, what kinds of transnational ties and strategies have Latin American communities and movements, particularly those most directly impacted by U.S. corporations and foreign policies, been able to create and sustain with solidarity groups regionally and in the North? What are the challenges, possibilities, and futures of North-South solidarity?
No comments: