The video tells the story better than I could. I know of no other public case of international accompaniers being targeted and raped by public security forces. I am wildly proud of my friend Andrea and her colleagues at Women's Link for doing strategic legal work around it, and for telling the story this well as part of that work. (fyi some fubs in the subtitles)
No comments:

Words that move by moving

This video is a fantastic example of kinetic typography - which can make text clearer and more powerful. I learned about it on a great new blog full of geographic visualization resources. Yet another tool for telling stories in new ways, with new media. Anyone know of any solidarity group using this tool yet?
No comments:

How to avoid empathy fatigue 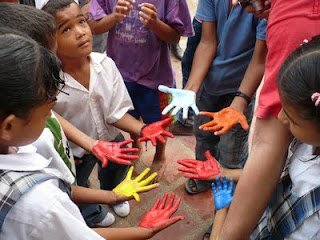 Jamil Zaki wrote a great article on this, that is well worth the quick read. He has some concrete tips at the end about how to present photos and stories. He argues for something I have long argued for in solidarity groups: no photos without names. (I would say if it's a large group and you can't get all of the names, try to get one - the fantastic photo here is from the CPT site with no caption, no date - the album is entitled mural painting by the Legion of Affection. In CPT's defense, they may have presented it elsewhere with names and stories, here it was in an album.)

Zaki also argues for the importance of offering, right then and there, along the story, something to do with that empathy. He quotes Sontag, "Compassion is an unstable emotion. It needs be translated into action, or it withers”. He conflates compassion and empathy here, which is an issue I have been chewing on for years, but I'll come back to that. At any rate, as much as I love the fabulous story emails that CPT sends about their accompaniment work (and if you're not getting these emails and care about Colombia, or are interested in accompaniment, you should get on their list!), it is notable that there is no ask at the end of most of these emails - not even for a prayer, or funds, or a quick click email action, or to tell a friend about this story, or to consider coming on a delegation. Something to consider for all organizations doing storytelling. I don't think it's offensive to readers, but quite the opposite - as Zaki argues in this article, it's a relief for them to be able to do something with the empathy you have just generated by telling the story. I would suggest making a different ask each time. Or maybe always a different action and funds.
1 comment:

I've said before, I agree with Arundhati Roy that no one is voiceless, some are simply less heard. I actually think even the dead are usually not voiceless. Their writings, recordings, or simply their lives continue to speak to us. But certainly it is more complicated, speaking with the dead.

Mumia Abu-Jamal, the U.S.'s most famous political prisoner, touches on it in this poem (spoken in the video, written below). Thanks to open anthropology for pointing me to it.

Can I speak? Can I speak about our dead at this celebration? After all, they are the ones who made it possible. Can someone say that we are here because they are not? Is that permitted?

I have a dead brother.

My brother used to laugh a lot but now he doesn’t laugh any more.

The fight that must be fought to keep our brothers with us, rather than the bullets that have killed them, has no nationality either. For this purpose we Zapatistas have many big pockets in our uniforms. Not for keeping bullets. For keeping brothers.