much of this is reposted from the blog Social Design Notes:

and: Los Angeles: The Journal of Aesthetics and Protest Press, 2008

Using and creating maps to challenge power and facilitate social change, usually characterized by an oppositional, anti-authoritarian politics. See An Atlas of Radical Cartography, NYC Guide to War Profiteers, Radical Cartography.net, Million Dollar Blocks, and the image here is of the map of Plan Colombia by the fabulous Beehive Collective

Producing maps that challenge the dominant, mainstream narrative of a site or history, often from an explicitly political or activist perspective or from the point of view of historically marginalized communities. See DisOrientation Guide, CrashStat, A Threat to Peace, Notes for a People’s Atlas of Chicago.

for ideas about how to do all of this check out Geog Visualisation Resources
No comments:

straight from the blog Groundswell (dedicated to critical cultural production at the intersection of art and activism) comes this post:

The Institute Design2context, at the Zurich University for the Arts, seeks to counter loss of the ability to imagine peace, and to substantiate their argument that this incapacity has resulted in an increase in disquieting space. In this effort, they have embarked on a search for visual representations of peace, a project they’ve titled Imagine Peace!:

We are gathering these representations in a variety of historical, cultural and political contexts, and bringing them together in research constellations. These constellations allow for a renewed ability in imagining peace and should contribute to forthcoming debates and controversies that encompass a vital presence of peace in political, civil and everyday life contexts.

The results of the research will be published as an encyclopedia in the autumn of 2009, and paired with written arguments that “today’s discordances and hostilities express the absence of proper imaginations of peace.” Conceiving of “Imagine Peace!” as

an exchange project, a source and networking knot for everyone active for the cause and creation of peace, be it in a political or personal context

the organizers have issued a series of calls for contributions, both written and graphical. 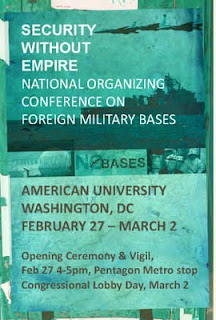 "The only truly common elements in the totality of America's foreign bases are imperialism and militarism - an impulse on the part of our elites to dominate other peoples largely because we have the power to do so."
- Chalmers Johnson, former CIA Consultant, Prof. Emeritus University of California

Many of us have a new sense of hope as we think about new possibilities in the Obama years. We also understand that if we and the world are to get the changes we need, we need to learn more and step up our organizing. This certainly applies to U.S. and international efforts to close the foreign military bases that make wars from Afghanistan and Iraq to Colombia and the Philippines possible, oppress "host" nations and communities, and divert our tax dollars from addressing essential human needs.

a great tool we could use in other struggles - this is a very personal video letter to Barack Obama, written and read by a member of Machsom-Watch/Checkpoint Watch, an Israeli peace organization that monitors and reports human rights violations in the West Bank and Jerusalem. I don't know that they call their work "accompaniment" but I would.
No comments: