do men not count? 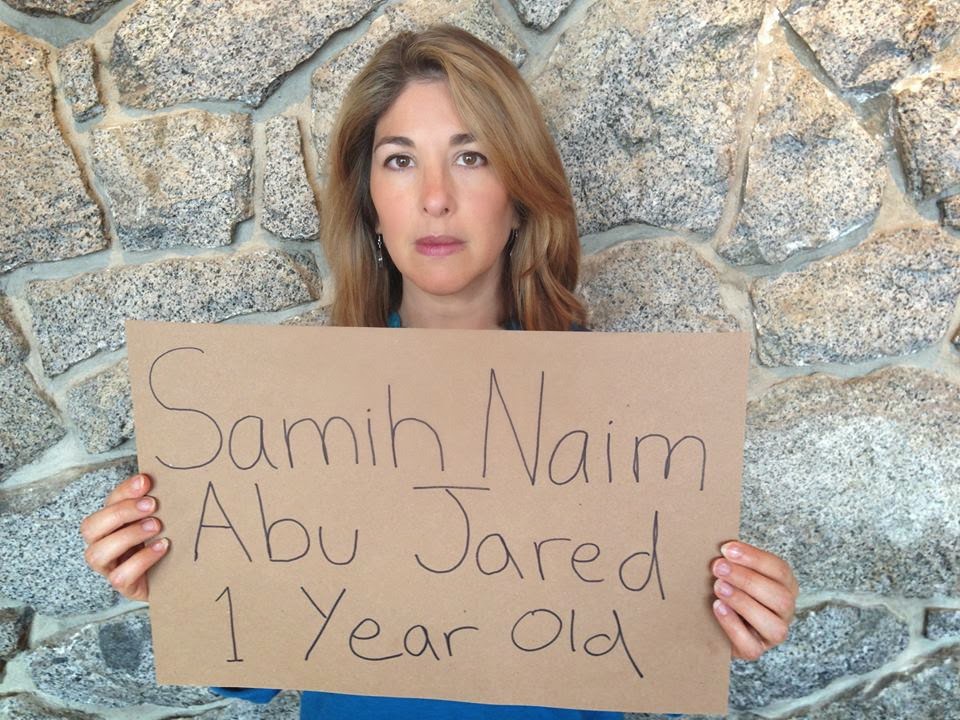 She took this photo for the freedom4palestine.org campaign, which collected these photos into the video, below.

Unlike the I am Trayvon meme, or even the We are José campaign, here folks aren't saying they are someone else, even collectively, but instead remembering the dead.  Standing with them you could say.  I am moved by this tactic, but notice that people are much more likely to write the names of children on their signs. Ads are taken out with just the names of the children killed.


At the protest against the assault on Gaza that I went to last weekend in Toronto there were signs specifically saying stop killing women and children.  Wait. What? Not stop killing everyone.  Just the ones that are very clearly innocent in your minds.  Hmmm.  Dangerous.

What about the men?  Is killing them somehow more ok? Well, the New York Times published an article on the tallies of the dead in gaza - "civilian or not?" - with a hideous graphic of the deaths by age and gender, which implies basically that all men between ages of 20 and 29 are ok to kill because they may well be militants.

But really, that seems to have been a common attitude across history. Helen Kinsella has an amazing book about the history of the figure of the civilian, which I found disturbing. What struck me was how deeply gendered and infantilized the figure is, and how disempowering it can be - how difficult it is to be seen as both a civilian and a citizen.

Maya Mikdashi wrote a powerful piece over on Jadaliyya asking, Can Palestinian Men be Victims? Gendering Israel's War on Gaza.  She reminds us that Cynthia Enloe coined the term “womenandchildren” in order to think about the operationalization of gendered discourses to justify war. It is no less problematic to use it against war! It not only infantilizes women but, as Mikdashi puts it, it creates men as always already dangerous. Their status as civilian is always circumscept she wrote, shortly before that hideous NYT graphic came out proving her point.

She writes, "The emphasis on the killing of womenandchildren, to the exclusion of Palestinian boys and men, further normalizes and erases the structures and successes of Israeli settler colonialism. “True civilians” and “possible civilians” are chosen. Men are always already suspicious, the possibility for violence encased in human flesh. The individual and personal extinguishing of female lives and the lives of children is massified and spoken of in statistics. Palestinians are framed as having the ability to choose whether they are a threat to Israel, and thus deserving of death, or not, and thus deserving of continued colonization clothed in the rubric of “ceasefire” or, even more elusively, “peace."

It is a strong argument against a hierarchy of victims and mournable deaths (not only by gender, but prioritizing deaths by bombs over the slow death of restricted food and medicine while trapped in what has become an open-air prison they cannot leave).  As she puts it, "To insist on publicly mourning all of the Palestinian dead, men and women and children—at moments of military invasion and during the everyday space of occupation and colonization— is to insist on their right to have been alive in the first place."

I get it.  I deeply agree.  And yet. And yet.  The deaths of the children particularly tug at me. I can see why they get used, because they have such a strong impact on us, even if this is not the most strategic form of solidarity in the long term.  When I went to this list of the names of the dead, the name that jumped out at me was that of a little tocaya, a name sister.

Even after reading all this theory, I couldn't resist, and at the protest last weekend I carried the name of my tocaya, Sara Omar Sheikh al-Eid, age 4, killed in Rafah on July 14th, 2014.  I hold her and her family in the light, to use the Quaker expression.  But I use her as a reminder, a way in as it were, to hold all Palestinians in the light of my heart.

It is much harder for me to hold the Israelis in the light, but I try.  It's hard for me to wrap my mind around how only 4% of Israelis could think they were using excessive force in Gaza.   There might be a media haze, but there is the internet.  So their fear must be overwhelming any facts.  It's hard to understand.  I mourn that they are so out of touch with their shared humanity.

I mourn and am outraged that my countries, the US and Canada, make this possible.  Quite literally, the US supplies the bombs - but they also pressure Egypt to keep the border closed so that people can't flee.  When else in history have people been bombed and not been able to flee from it like this? They are trapped.

The bombing must stop, but then the slow deaths of being trapped with limited food and water and medicine must end.  This occupation must end for us all to be free of this outrage against everyone's shared humanity.
No comments:

I was moved by this amazing singing, above, and the beautiful solidarity statement, below, by South Africans who have served as accompaniers in Palestine through the World Council of Churches program.

STATEMENT BY SA-EAPPI ON PALESTINE AND ISRAEL31 July 2014We, as a group of 70 South African ecumenical accompaniers who have monitored and reported human rights abuses in Palestine cannot remain silent at a time like this. We remember how often Palestinians told us that if we as South Africans can have a just freedom, then it must be possible for them too.South African ecumenical accompaniers have worked side to side with other internationals in occupied Palestine since 2004 in the Ecumenical Accompaniment Programme in Palestine Israel (EAPPI). EAPPI was established by the World Council of Churches in response to a call from the Heads of Churches in the Holy Land. EAPPI provides protective presence to the vulnerable Palestinian communities and supports Palestinians and Israelis working together for peace. We have witnessed multiple and layered injuries and losses by Palestinians whether Christian or Muslim. We value and recognise the safety and dignity of all those in Israel and Palestine. Yet we are not impartial when it comes to international law.SA-EAPPI is appalled and devastated with the ongoing bombings, shelling and rocket firing in Israel and Palestine. However we absolutely reject any arguments that position the conflict between Palestinians and Israelis as two equal sides. The disproportionate killing of civilians including so many children horrifies us. That people are deprived of shelter, food, electricity, water and the hope of freedom is a source of shame to all who value the sacredness of life and the protection of international law. The current escalation in the conflict is not a war, let alone an act of self-defence, but a punitive, planned, strategic, militant expedition by a regional super-power to deepen Israel’s military occupation of Palestine. Moreover, Israel’s systematic, systemic, institutionalised oppression of the Palestinians that violates international law on a daily basis makes the conflict a-symmetric.SA-EAPPI endorses the Memorandum to the South African Government issued by the National Coalition for Palestine (NC4P) on 28 July 2014 in Cape Town. In addition, we appeal to: