I just discovered the pinky show. There are a bunch of these, but this one cracked me up. It takes some patience to listen to the slow pace, and a certain sense of humour, but there are some profound and deeply funny insights about decolonizing solidarity in here!
1 comment:

changing the world with one foot in the academy

This interview with Derek Gregory is well worth reading. It's great to get to have him as my adviser and get to talk about doing this kind of work.

The citation for the interview is:


If you have academic access read the pretty version, but if not, I put it up here
Interview with Derek Gregory
1 comment:

it's so damn hot! 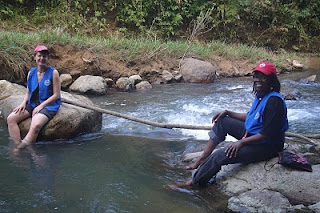 Yes, it is HOT in Barrancabermeja, Colombia, where Christian Peacemaker Teams does protective accompaniment. So hot that when I visited the team I ended up soaking my feet in pails of cool water because they were so swollen. Or better yet, a cold stream - like this picture taken on a CPT delegation. That's me on the left, with Sylvia, the CPT anti-racism coordinator. How fantastic is it that CPT has a position like that? But still a long ways to go.

I should have taken aspirin for a few days before getting there, apparently. Didn't help that I had been living in high high altitude Bogota. It *does* actually take my body a while to get used to humid heat - but this is no excuse for the racist environmental determinism that believes that people that live in cooler areas are just, well, better. Or that people with, say, African heritage can handle the heat better. Sylvia got heat stroke and it was no joke. You might think that these old racist beliefs are long gone, but this is such a deply ingrained colonial pattern that it keeps cropping up.

One of the geographers who has written a great deal about this is David Livingstone. He recently did a great series on the BBC of five short shows called the Empire of Climate. If you listen to only one, listen to this one on climate and race.
No comments: 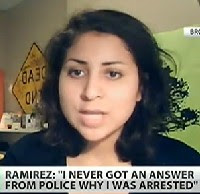 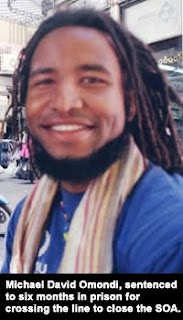 For a great full account of the protest and the arrests read this post by Clare.
No comments: