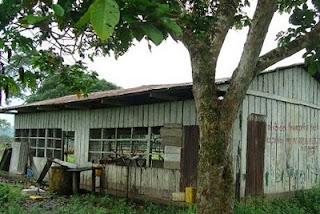 The government has an ambitious plan to resolve the crisis with a far-reaching law to return land to communities that have been forced to leave. But the obstacles met by the Afro-Colombians of Curbarado in their struggle to reclaim their land - despite high-level support from ICJP, PBI and the justice system - suggest that implementing a land-restitution programme across the country will be a tough challenge.
No comments:

I am so inspired by the peace communities and humanitarian zones in Colombia. I have heard about this one for years, was great to see images of it. PBI Colombia is doing a fanTAStic job of putting out vidoes these days! huge kudos!
No comments:

Wishing I had been more aggressive with the Border Patrol that was racially profiling folks as they got on to the San Juan Island ferries in Washington - making them miss the last ferry of the night.
No comments:

bibliography of academic work on solidarity

For those geeky enough to use the fabulousness of zotero to manage their citations, please join me in adding readings to the collective 'solidarity' bibliography that I set up here. Inside zotero you can also sort and do all sorts of things with and to this list, but for those who don't use zotero you can see the list here. This is just an initial collection and missing all sorts of key readings - please help me add them.

I also set up other collective lists on Protective Accompaniment (one of the more dramatic strategies of international solidarity), and, given my fascination with whiteness in Latin America, one on Race and Space in Latin America and the Caribbean.

Zotero is a great tool for collaboration - please join me in adding to any of these lists! If you're wondering what zotero is, check out the short video below. I am now totally addicted to its ability to enter full bibliographic material with one click (thus these lists). I used to mostly click information in off of google scholar, but I find I get cleaner entries when using my university library.

Getting Stuff Into Zotero from zotero on Vimeo.

Maybe the traditions of Christian solidarity and Labor solidarity aren't actually all that far apart. The slogan
"An injury to one is an injury to all" sounds an awful lot like
"If one part suffers, every part suffers with it" - I Corinthian 12:26
No comments: