I am not a place

I have written repeatedly about why it's important to remember that I am not Eric Garner, though I am most certainly WITH those who are targeted like he is, and those struggling to end police violence, against black people in particular.

The other twist on this problematic solidarity slogan I've seen more and more lately is for people to say We are x place, instead of We are x person. So We are Mike Brown becomes We are Ferguson, or #WeAreAllAyotzinapa, #AyotzinapaSomosTodos.  Generally this is said by people not actually in or from that place.

I am absolutely concerned about what is happening in those places and stand with the people struggling there, but I again have qualms about these slogans being appropriative.  That said, if you haven't taken action to protest the massacre in Ayotzinapa, here is a great letter you can sign, under that slogan.

This sort of slogan makes a lot more sense to me when it is people in a place using the slogan to protest environmental destruction of that place.  This is the case of the We are Seneca Lake site, that details the larg ongoing civil disobedience campaign by people in the area to stop fracking that would destroy the finger lakes of New York.  The short video below describes this struggle. I love that they dress in blue to show their solidarity to and connection with the lake.  And happily, since this video was shot this campaign was won! Fracking has just been banned in New York! 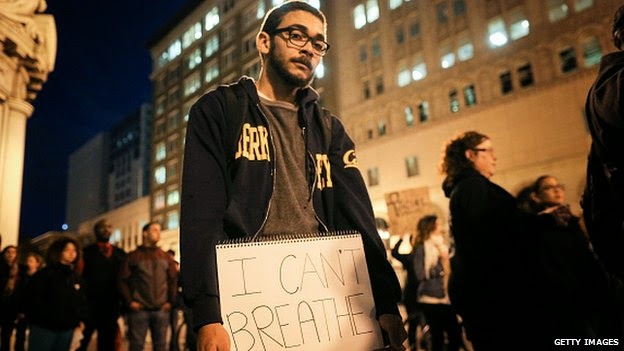 (Apologies for the long blog silence.  This has been my first semester as full-time faculty. I'm thrilled to be teaching geography at a people's university and grateful for the support of my colleagues and my fabulous students at York U this semester.)
No comments: