I'm at the AAG (geographer's conference) and looking forward to the Bodies, Borders, and Territory Sessions on Sunday - I'm on the panel at the end. Here's the great description of the sessions:

Feminist geographers are engaging foundational, long-standing geopolitical debates through the lens of the body, both as a scale and a site of study, while also introducing previously neglected questions and perspectives. An attention to bodies has revealed that geopolitical conflicts are felt in a variety of ways at micro-scales, and that these conflicts are often shaped by the everyday experiences of bodies on the ground. At the same time, scholars have effectively demonstrated that bodies themselves are frequently contested in much the same ways as territory: they are treated as frontiers and interiors, they are counted and managed, and they are often invoked to represent the fate or well-being of territory and imagined communities at larger scales.

This session aims to explore the intersections of bodies and territory, with a particular focus on borders and boundaries. Some of the questions we aim to address include: Through what sorts of structures and processes is the body made into territory? How are borders enforced through bodies, and how do bodies themselves become borders? How are bodies mapped onto territory and how are territories mapped or marked onto bodies? In what ways do bodies make borders porous, and how are bodies themselves unbounded? How might bodies expand the possibilities of resistance to uneven power structures and oppressive political projects, and how do people resist being used as objects for geopolitical ends? In the spirit of feminist geopolitics, papers in this session are informed by fieldwork and that engage critically with methodologies and researcher subjectivities.
No comments:

The International Women’s Peace Service is the only all-women international accompaniment team in the world. It is run entirely by volunteers, who make a 3 year commitment to IWPS, serving a minimum of one 3 month term in the West Bank, Palestine, followed by further terms in Palestine of one to three months in their 2nd and 3rd year.The IWPS original mission statement explains that,

"Having a single-sex living space will make it easier to integrate into the local Moslem culture, but this is not the prime reason for the women-only structure. Nor is it indicative of a view that women any more than men are natural born peace makers. However, the decision does reflect an observation that women often inhabit different cultures than men, are disproportionately involved in caring work and often have greater insight into creative ways of resolving conflicts. Women are often at the receiving end of gendered violence both in peace and war. A feminist view sees masculine cultures as especially prone to violence and so feminist women tend to have a particular perspective on security, safety, violence and war. Women's different and varied voices can often be drowned out in a mixed structure but in women-only spaces their voices can be heard more clearly. Our project will therefore be an experiment in feminist peace and justice work."

A volunteer with IWPS wrote to me that,

“being a women only team actually helps us having a closer relationship with women and women's organizations in the area we work in, while I do not have the impression that it is an obstacle in terms of contact and cooperation with Palestinian institutions or organisations that are male dominated. We do all the work the other mixed international teams in Palestine also do, but we try to have a women's focus in choosing local contacts and partner organizations and in some of our report writing. IWPS has supported the founding of a Salfit area women's organization, Women for Life, that developed out of women from different villages actively taking part in the popular resistance against the Apartheid Wall.”

Tony Macias over at Witness for Peace has done up a beautiful video (below) with testimony and photos of Inocencio Hernandez, a Oaxacan farmworker, talking about why he went to the US to work, and why he went back. It's well worth watching. But what struck me is that on the page where he introduces the video he starts with one of these calls to build empathy by relating it to your own experience that I've posted about before. He writes

"One of life's big truths is that most things don't matter until they happen to us. From the momentous (say, loss of a loved one) to the trifling (hair loss), we just don't focus in on realities until they become personal to us. The phenomenon of migration is global, historical, and complex, and it's inconsequential to people who aren't forced into it.

But that's not really true, is it? Maybe we're all migrants: In 2006, 50 million US Americans changed homes and 8 million of those changed states when they did. Ok, moving across town involves absolutely zero danger and loss when you compare it to what undocumented migrants struggle through each year (Read here, here, and here if you don't believe me). But what remains true is that we know something about uprooting ourselves, and we do it for similar reasons (economic motivation, for instance). This doesn't make us all the same, but it's a chance for us to relate better to one another."

Now this is a comparison I think works to build solidarity more than appropriate - because it also highlights how the experiences are different, and because of that magic last line. 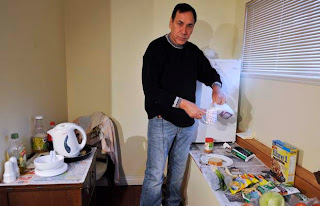