and then there's the danger of thinking you "know" because you've "seen" it.

in light of my ongoing musings about simulations - is going to "see it yourself" any better than playing a fakey sim video game? what makes solidarity tourism different than poorism (poor tourism)? (lots, but worth musing about)

I love the kind of video activism above that calls out poorism voyeurism. so powerful. and more and more accessible, in an age of flips and internet cafes and open source editing software.
1 comment: 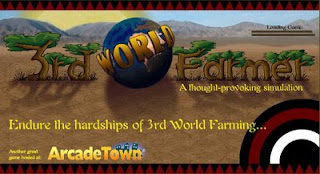 Back to the simulations questions. I stumbled on a bunch of simulation video games where you can

be a "third world" farmer

be a sweatshop worker

be a displaced Darfurian

be an African health service worker

As the Darfur game folks put it, "it offers a faint glimpse of what life is like". Is this useful? Or dangerous, to think that you know? Or will it be obvious that through a video game you only barely know? Can these games weave connections between here and there, us and them?
1 comment:

please take 30 seconds to help protect Martha and her family

A few days ago I posted this great solidarity video work and incredibly brave and powerful testimony and video footage by Martha, the daughter of José, a campesino who was killed by the Colombian army, who then concocted a scenario to present him as a guerilla - ie, a "false positive" - a hideous euphemism if ever there was one.

The trial against a soldier indicted in this case began ten days ago. I am horrified and outraged to report that Martha's uncle--a key witness in the case--was shot in the head on Sunday in an apparent attempt to disrupt the trial and scare the other witnesses, including Martha. He is in intensive care awaiting neurosurgery.

MARTHA IS IN IMMEDIATE DANGER. She and her family need your support. They simply ask for protection and justice in the cases of Martha's father and uncle. Please take one minute to send a letter to U.S. Ambassador William Brownfield, asking him to stand up for justice in this case.

You can also send Martha and her family a message of support, in English or Spanish. They are incredibly brave and these letters mean a lot to them.

A new video of Martha asking for justice, and for your support, is below.

Target for Telling the Truth from Witness For Peace on Vimeo.

the power of having a video camera handy

Absolutely amazing that this campesino family had quick access to a video camera to document how the Colombian army had left their father's body. Imagine a wold where everyone has quick access to a cheap and discreet flip camera? This is also very inspiring solidarity work by witness for peace as they amplify Martha's brave brave voice. You can stand with Martha, stand for justice and dignity, by taking this quick online action to ask the US to stop funding an army that kills it's own people. In a very cool online activism move I've never seen done by a solidarity group before, you can also send Martha and her family a quick online note of support here. I can't emphasize enough how scary it must be for them to put themselves at risk by telling this story, and how much letters like this must mean for them. please take a minute to write both.
No comments:

what work do simulations do?

I had a great conversation with my friend Amy over lunch today about simulations that medical students do of being, say, (and each person gets a different person to play) a person with one leg, substance abuse problems, and trying to get housing, and having to go to stations around the room to talk to simulated social service offices, the bank, landlords. Does this help these students be more empathetic when they are doctors? Can such a brief distant semi glimpse into what it miiiight be like for someone make a difference? How so? Well a lot of people seem to think that the similar sort of glimpse offered by the game In her shoes originally designed by my friend Karen Rosenberg and distributed in the US by the Washington State Coalition Against Domestic Violence makes a difference. It's been played by service providers, cops, judges, and all sorts of folks for years. Another friend, Lupita Patterson, worked on making a version reflecting the realities of Latino survivors in the US, and then PATH, the Program for Appropriate Technology in Health, localized versions for several other countries (localizing means more than just translating, but making the scenarios, stories, etc relevant to the context). What I think might be even more important is that the Coalition has followed it up with an advocates guide called In our shoes, next steps. As they put it "This workbook helps communities take the next steps beyond understanding a survivor's experiences (In Her Shoes) to embracing our collective responsibility for ending domestic violence and poverty (In Our Shoes)." Because too often I worry that simulations leave people thinking they've really been in someone else's shoes, when of course you have only had the vaguest sense of it - and don't help us think about where then we want to walk in our own shoes, and how to walk alongside people in other shoes. I also worry that, as my friend Sarah puts it, if I walk in their shoes, is there still room in their shoes for them? Or to use academic jargon, when does empathy become appropriative? But really, in a workshop simulation, will anyone think they are *really* in anyone else's shoes? Or will it be clear it's just a paper doll cutout of someone else's shoes?

For another way more high tech simulation, check this video out: (I think it does good work, but it doesn't feel much to me like what I had going on emotionally when I walked down a path where folks had been hurt by mines a few days before, or when I chose to pee in a field that might have had mines rather than by the truck next to 30 people)

A Virtual Minefield from veggenmin.no on Vimeo.