organize against US militarism in the Americas

wow, a trailer for a movement event? and there's a spanish version too. the camp sounds particularly fun. wish I could go!
No comments: 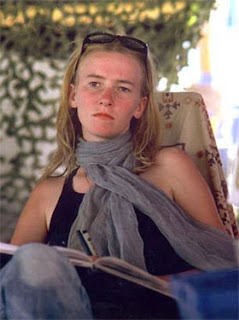 Rachel was killed nine years ago yesterday, as she stood in front of an Israeli bulldozer, trying to stop it from demolishing a Palestinian home. She is one of three international accompaniers killed while accompanying (the others are Tom Hurndall, also in Palestine, and Tom Fox, in Iraq).

Her parents issued this moving statement:

It has been nine years today since our daughter Rachel was crushed to death under an Israeli driven, U.S. funded and built, Caterpillar D9 bulldozer in Gaza. In March 2003, the news was full of talk of war with Iraq – a preemptive war to protect the west, particularly the U.S. and Israel, from the weapons of mass destruction then alleged to have been amassed by Saddam Hussein. When Rachel traveled to Gaza that year, the world was not watching. According to Human Rights Watch, from September 2000 until September 2004, 1,600 Palestinian homes in the city of Rafah were destroyed by the Israeli military as it occupied the Gaza Strip. One-tenth of the population lost their homes. Rachel chose to be in Gaza when the ground attack against Iraq broke out. She feared an escalation of the violence and a tightening of the isolation against people there, as the world looked to the northeast and watched the carnage in Iraq. It did not happen as immediately as some expected, but with the Israeli military attack on Gaza of November 2008 through January 2009, the violence became overwhelming, and the tightening of the seige initiated in 2006 by Israel to remove Hamas, made the isolation nearly complete.

In 2003, Rachel wrote: “I went to a rally a few days ago in Khan Younis in solidarity with the people of Iraq. Many analogies were made about the continuing suffering of the Palestinian people under Israeli occupation and the upcoming occupation of Iraq by the United States – not the war itself – but the certain aftermath of the war. If people aren’t already thinking about the consequences of this war for the people of the entire region then I hope they will start.”

Now, in 2012, we listen to similar news – calls for bombing Iran to prevent it from acquiring nuclear weapons. The preemptive war has already begun with the assassination of Iranian nuclear scientists. Our government tells us sanctions against Iran will pressure their government to abandon any program to develop these weapons, but experience tells us sanctions only increase the defensiveness of repressive regimes and tighten their control over their populations.

The news from our politicians is discouraging and even frightening, but in the meeting places and streets in our communities, we are making the kind of change that Rachel envisioned. It is happening in Olympia with continuing support for the Olympia Food Co-op’s boycott of Israeli products until the rights of Palestinians are addressed. Throughout Puget Sound this week, we have successfully challenged efforts by the Israeli government to use members of the Israeli gay community to distract from the continuing oppression of Palestinian people. Churches in our region are conversing about divestment from corporations like Caterpillar Inc. for their refusal to address their continuing participation in human rights abuses and the illegal occupation of the West Bank and Gaza.

As the threat of war with Iran, the disintegration of the situation in Afghanistan, and the bombing of Gaza continue, the work we are all doing in our hometowns at the grassroots level is powerful and critical. Today, as we remember Rachel’s stand nine years ago, we encourage our friends across the country and world to strengthen your own communities, educate, educate, educate, support each other in taking action, and walk with peace, love, and forgiveness in your hearts as you work for change.

Unless you've been on the road (like me) I'm sure you've heard about the video about Ugandan rebel leader Joseph Kony by a group problematically called 'Invisible Children' (to echo Roy, no one is invisible, just unseen). It was released on March 5th and in the past week it has had, astoundingly, 75 *million* views on youtube.

There are some great critiques out there of the video, but this one by Adam Branch particularly spoke to me. As he puts it,

"Which brings up the question that I am constantly asked in the US: "What can we do?", where "we" tends to mean American citizens. In response, I have a few proposals.

The first, perhaps not surprising from a professor, is to learn. The conflict in northern Uganda and central Africa is complicated, but not impossible to understand. For several years, I have taught an undergraduate class on the conflict, and although it takes some time and effort, the students end up being well informed and able to come to their own opinions about what can be done. (I am more than happy to share the syllabus with anyone interested!)

In terms of activism, I think the first thing we need to do is to re-think the question: Instead of asking how the US can intervene in order to solve Africa's conflicts, we need to ask what we are already doing to cause those conflicts in the first place. How are we, as consumers, contributing to land grabbing and to the wars ravaging this region? How are we, as American citizens, allowing our government to militarise Africa in the name of the "War on Terror" and securing oil resources?

That is what we have to ask ourselves, because we are indeed responsible for the conflict in northern Uganda - however, we are not responsible to end it by sending military force, as Invisible Children tells us, but responsible for helping to cause and prolong it. In our desire to ameliorate suffering, we must not be complicit in making it worse."

the full article is here.
No comments:

PBI has done a great series of videos about their .... well, I would call them 'partners', the organizations that they accompany - which PBI, strangely, calls their 'clients'. Not the paradigm I would want to call on, but anyways, this short video focuses on ACVC and their work with artisanal gold mining in the zona campesina - protected small farmer reserve zone.