another short video by PBI, this time about the zona campesina, a 'small farmer reserve zone'

Here's another one of those fabulous animated big thinker videos - this time its Zizek going on about the dangers of charity, "and so on and so on". What he frustratingly fails to do then is talk about how solidarity is different. Still, fun to watch.
No comments:

Our own settler reality 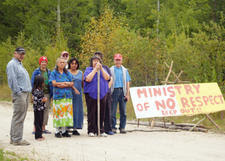 I appreciated this post sent by Christian Peacemaker Teams so much I'm reposting it in its entirety. (For the record, cpt does do accompaniment in aboriginal territory in Canada (see picture). For more on their work see cpt.org)

27 September 2010
AT-TUWANI/ABORIGINAL JUSTICE REFLECTION: Seeking the peace of Palestine by engaging our own settler reality.

A life-changing thought came to mind this past week while I was serving in the village of at-Tuwani. I was out with Palestinian shepherds, watching the Jewish settlers of Ma'on construct another large chicken barn on stolen Palestinian land. As I watched, all of a sudden, the armed Jewish settlers and their bulldozers vanished from sight, only to be replaced by other white settlers—persons of European origin, carrying Bibles, guns, and Christian civilization. Then the Palestinian shepherds next to me, a couple of young Muslim teenagers, also disappeared, and in their place stood two men of First Nations origin. And before I knew it, the desert land beneath my feet began to tremble, and thousands of huge Douglas Firs erupted from the hillsides, while a raging river full of salmon and steelhead burst forth from the rocky valley below.

There was no mistaking it. I was in my “home and native land,” my country of Canada, my province of British Columbia. And as I looked around, I perceived the disturbing truth of the dream.

Historian Norman Finkelstein thinks what happened to the indigenous of Turtle Island (North America) is the best analogy one can draw on to understand current events in Palestine—the ethnic cleansing, the theft of lands, the racist policies. But I'm pressing beyond illuminating parallels. Could it be that the oppressions of these two peoples are connected in some deeper way? And could it be that we North Americans who seek justice in Palestine cannot actually do this work with efficacy, let alone integrity, unless we are seeking the same justice for the host peoples in our countries?

We see (or read about) the Israeli colonialists grabbing more and more land, and getting rid of more and more natives. We see and we cry out; we rage and resist. But where is the similar protest on behalf of the peoples who have suffered the largest holocaust the world has ever known? Conservative estimates assert that there were at least 10 million Native persons living on Turtle Island when Columbus came. By 1900, only 250,000 were left.

Where is our rage? And where is our repentance as inheritors and benefactors of the North American settler movement? If we condemn today's Israeli settlers for stealing Canaan from the Palestinians, what will we do about the Promised Land our settler forefathers wrested from indigenous people, land that we've inherited, land that we live on (and land, of course, symbolizing all our stolen wealth, power, privilege, culture, etc.) Is that simply all in the past?

We North Americans who are seeking justice and peace for the people of Palestine need some new priorities: to get to know the “Palestinians” back home, to hear their stories, and seek justice in solidarity with them. If we did, greater integrity would certainly come our way, but also something much more important. For in a cosmos in which Creator has made everything interrelated, the fight for justice in both places (abroad and at home) might mean that both peoples will experience some kind of just peace sooner.

The distinguished Palestinian poet Mahmoud believed and proclaimed that Palestinian and Native suffering were profoundly connected. In his poem, “The Speech of the Red Indian,” he tells settlers of all stripes—be they Jewish or North American like us —the posture that we need to adopt in order to heal our one human body. It is not a comfortable posture for us settlers. But it is the right and necessary one, and so deserves the last word:

There are dead who light up the night

and the dead who come at dawn

to drink your tea

as peaceful as on the day your

guns mowed them down.

O you who are guests in this place,

for your hosts to read out

the conditions for peace

in a treaty with the dead.
No comments:

I wish I were going to the third annual Empire and Solidarity in the Americas Conference in New Orleans this coming weekend. If you live nearby, go for me! The theme this year is Legacies of Central American Solidarity. The good news is that many of the papers are online here. Check it out!
No comments:

Just as I was complaining about the underuse of online video by accompaniers, PBI Colombia has taken off and gone gangbusters with a whole series of them. This one shows them accompanying the accompaniers - which happens quite often. In this case PBI is accompanying Colombian human rights workers as they travel out to accompany the Wiwa indigenous community.

(In other news, I'm having a great time at the Latin American Studies conference where yesterday I went to a session on solidarity at which Aviva Chomsky yet again wowed me. I hope to post both her paper and the others here soon)
No comments: