This time, the traffic changed, and they weren't able to force a car crash. This time, it was clear that Martha was in a bulletproof car, so when they pulled the machine gun out all they could do was yell and point it at her. This time, solidarity will be strong, so that there won't be a next time.

Who wants to kill Martha? Why do they want to kill her? Well, I've written about her case before. Martha is a key witness in the case of several Colombian army soldiers who are accused of killing her father, Orlando Giraldo, an innocent civilian, and dressing him up to look like a guerrilla (to improve their 'combat kill' bodycount). He was one of thousands of documented cases of so called 'false positives'. There has yet to be any justice in any of these cases. Instead there has been all sorts of delays in the few cases that have made it to court, and many threats and attacks. Just last year Martha's uncle was shot in the head on the way to court to testify on this case.

Martha is incredibly brave to keep pressing forward on this case. Not only did she keep going to court after her uncle was shot, she came to the United States to speak about this case! She testified just a few months ago in front of Fort Benning at the vigil to close the School of the Americas (video of her speaking here), connecting the training of Colombian soldiers there to incidents like her father's murder. I was very honored to walk with her at the vigil, holding a banner remembering her father (see picture, I'm in orange and she is next to me). 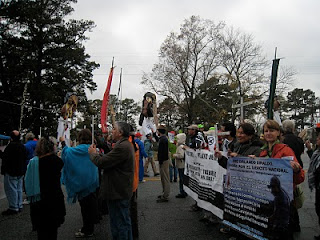 Coming to the SOA vigil might have put her at even more risk now. But even after this attack, she has chosen NOT to flee into exile, but to keep pressing for justice. This is risky.

But you and I can do something to help protect Martha. The US is not only a training but also funding the Colombian army. That's our taxdollars we're talking about (well, if you're in the US it is). So we can write and say that we are concerned about funding these fake combat kills in general, and Martha's dad in particular, and that we want justice in this case, and safety for Martha as a witness in it. There's a quick click system online to do this (with one click you can also send a message to Obama asking him to close the School of the Americas).

But you can do better than this oh-so-easy online action. Please also take two minutes to actually CALL the State Department Colombia desk. They got a bunch of calls on Friday, so I waited until today to ask for more calls. But we need to keep calling. If they get enough calls I do believe that they will be sure that the US ambassador says something to the right Colombian general who will say something to someone who will call off the death squad goons. Of course, please don't say that when you call. Below is a quick script of what you can say. You are likely to get an answering machine but go ahead and leave a quick message! Or if you get them, please be brief and polite.

I am deeply concerned for the safety of Martha Giraldo and her family in Colombia. Martha's father was killed by the Colombian military in March 2006. Members of the 3rd Brigade are currently on trial for the killing. As Martha and her family have been working to bring justice to this case, they have received threats and her uncle--a witness in the case--was shot in the head by assassins last year. This week, while Martha was driving through Cali, gunmen tried to run her off of the road and pointed their guns at her.

Given the seriousness of this case, I ask that the State Department take a special interest in it. Please urgently communicate your concern for the safety of Martha Giraldo, and the rest of her family, to the appropriate Colombian government authorities, as they are at serious risk simply for calling for justice in the case against the killers of Jose Orlando Giraldo.

Also, as is typical in Colombia, the trial against her father's killers has been repeatedly stalled. I urge you to inquire about the status of the Jose Orlando Giraldo trial and express the State Department's interest in its swift completion.

Finally, please send Martha and her family a short letter of support. Martha is scared. Knowing she has support makes a huge difference in her spirits and her ability to keep moving forward on this case. Please take a minute to send her a letter today--in English or in Spanish (Witness for Peace will translate them if need be).

Actually, the truly last ask is for you to please hold Martha in your hearts and prayers, hold her in the light, send her energy of protection, or however it is you think of these things. Together we hold each other.

avatar: how not to do solidarity

There have been several stories about "the real avatar" story. The video here is another example - the ritual held by the women starting at minute 4 is a striking way to try to get the mining company and the Colombian military out of their lands. Also love this image of Palestinians in a protest dressed like the Avatar characters. Lets keep using the movie to bring more attention to the real thing! Haven't seen the movie yet? It's both a powerful expose of the evils of empire, and then falls into all sorts of colonial white supremacist saviour traps. A study in how not to do solidarity. But still well worth seeing. I mean, hey, Evo Morales and Starhawk like it. The Vatican doesn't. Do you need more than that?
No comments:

fantastic action today in Vancouver. one of many! I had great fun dancing in a salsa rueda at the big No Olympics on Stolen Native land protest. We had great tshirts that in front said we celebrate ... and on the back said either: homes for all, quality public education, using less and living more, climate justice. Basically all the things we wish some of these billions and billions of dollars were being put towards. Great coverage of the resistance at vancouver.mediacoop.ca
No comments: 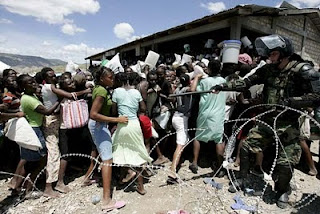 Empathy will save us in the end?

Jeremy Rifkin has a new book out called 'the Empathic Civilization'. I haven't read the book, but he published an interesting article in the Huffington Post which appears to be a summary of his main arguments. It's a bit grandiose. Empathy is going to save us from geopolitics and connect us to Mother Earth. That would be lovely, but I'm skeptical. Empathy can often go awry. As in, "Oh I know just what you're feeling". No you don't. And you don't have to usurp my experience to feel our common humanity. To be moved. Moved into walking with me, struggling with me. Still, the article is well worth the quick read.
2 comments: