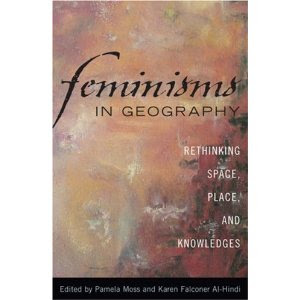 My review of the book Feminisms in Geography: Rethinking Space, Place, and Knowledges, edited by Pamela Moss and Karen Falconer Al-Hindi just came out in thirdspace. The review is entitled Mutilingual, multifeminisms, and is online here.

I would be honored if you read the whole review, but here are two key paragraphs:

"... These issues are also addressed in Geraldine Pratt’s absolutely fantastic short chapter (if you read only one chapter, read this one) entitled “Complexity and Connection”. It takes her earlier piece (also included, and entitled “Reflections on poststructuralism and feminist empirics, theory and practice”), and carries it beyond a US context. She argues, again, for the central role that geographers can play in working through differences between women. Rather than spouting tired universalizing generalizations, geographers can actually do the hard work of translating across contexts, material differences and, as she puts it, “competing, situated universal norms and claims” (70), rather than simply translating ideas into the language of the dominant framework, or absorbing them into a generalization. As a translator, I couldn’t agree more. Although I have been arguing here for prioritizing and funding more translation into English, I envision this as only one part of an engaged back and forth building of more connections between (as the book calls us, though I do not love the term) “Anglo-American” and other feminist geographers. Gerry Pratt is absolutely right that as geographers we have an important role to play in building a transnational feminism by drawing, as Cindi Katz (2001) calls them, counter-topographical contour lines that show how the same processes affects us in different ways. Doing so can help us articulate struggles across different places. These lines, as Pratt puts it, open possibilities for political connection (71) and meaningful alliances. We are not pure victims or oppressors, and we can forge connections “across our many shifting complicities as well as oppressions” (73).

Kath Browne’s chapter was useful to me in thinking through how to do this work as geographers. In it she points to how power and privilege work even in feminist geographies. I very much appreciate that she asks how relations of power between feminist geographers re-produce experts and expertise, and that she looks in particular at the practices of power that continually re-create spaces of speaking and writing. This book as a whole works to interrogate, as Kath Browne puts it, how we do our feminism, and work to open those practices. Holding a review panel at the AAGs like the one these review essays come out of, with more ‘junior’ scholars, continues this work. But it is not just a matter of, again in Browne’s words, including more silenced voices, but actually sensitively and constructively engaging with one another in safe spaces. This book functions as one such safe space, the review panel was another, and I hope that this journal can continue to be one. .... continued here.