running with a red hand

Tomorrow the Canadian inquiry on the crisis of missing and murdered indigenous women (MMIW) will be released, but it has already been leaked that it will be declared an ongoing genocide. It was super controversial in Canada when the Truth and Reconciliation Commission declared native residential schools (boarding schools in the US) to have committed 'cultural genocide' - but it sounds like this time the cultural is being dropped. 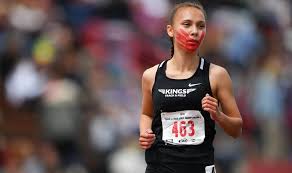 It's astounding to me, having recently moved to the US from Canada, how little attention there is to this crisis in the US, when in the US women on reservations can be 10 times more likely to be killed or disappeared. But check out the inspiring activism by Rosalie Fish (in the photo). She has been racing with this red hand on her face, and the letters MMIW down one leg. Each race she runs in honor of a particular indigenous woman who has been killed in Washington state. Since she is a young indigenous woman herself, the red hand is particularly powerful imagery. It seems to me to be saying I have run away from this violence so far, but other women like me haven't been able to.

The US needs to stop running from this crisis and face it head on, learning from Canada's example.