Staying in shape is NOT solidarity with refugees

Staying in shape is NOT solidarity with refugees

After Sara’s post last week on this blog about a very specific act of solidarity running, Rosalie Fish’s running with a red hand, a campaign framing running (or walking or biking) as “solidarity” with refugees seems strikingly hollow.

In January, the United Nations High Commission for Refugees (UNHCR) launched what they termed a global “solidarity movement,” “2 billion kilometres to safety”/”1 billion miles to safety.” The campaign invites people from 27 countries to “Step with Refugees” by tracking their walks, runs, and bike rides, to cover the same distance they estimate that refugees cover every year.[i] Its various aims include: to “honour refugees,” to “build better understanding” in the face of widespread “misconceptions about refugees,”[ii] to draw specific attention to refugee journeys, to raise awareness about the work of UNHCR field staff and how they assist refugees, and to encourage people to raise funds for UNHCR.

The picture above, from the homepage of the campaign website (stepwithrefugees.org), poignantly summarizes this "solidarity movement": on the left, three people are shown in fashionable athletic clothing and running shoes, running on a boardwalk at a beach; on the right, three people walk barefoot in an area that looks arid. One of them is carrying a child, and the two others carry bundles, presumably their belongings. The photos are lined up so that the figures are similar heights, with their feet stepping at the same level, all heading the same direction, perhaps highlighting the “solidarity” of the athletic figures on the left, with those walking (presumably) to seek safety on the right. In an official UN News Story entitled ““How to stay in shape and step up support for refugees” the Deputy High Commissioner states: “This campaign will encourage people to support refugees through something they are already doing – walking, cycling, running.””  Equating walking or running for fitness as a “solidarity movement” with refugee journeys is almost as ridiculous as it is offensive (no matter how many financial donations are involved).

A celebrity hosted promotional video[iii] suggests that by joining with others and dedicating the distances covered to this campaign “You can honour [refugees] resilience and determination.” In sharing refugee stories the campaign does distinguish the much more difficult and dangerous conditions faced by refugees fleeing conflict than people running or walking for fitness. This distinction seems insufficient because of the continued linking of fitness to solidarity with refugee journeys.

“Step with Refugees” appeals to forms of athleticism that are often privileged, particularly through the front-page image, and in the use of smart watches and other fitness tracking apps. It conflates individual self-improvement, mobilizing financial donations through cumulative individual endurance efforts, and feelings of “honouring” others, with solidarity. In my mind this contrasts greatly with the many current and former refugees and displaced people who do themselves participate in sport and fitness, such as football leagues in refugee camps. While sports are very important to many people who have experienced forced migration, I strongly doubt that many of them would equate their athletic activities with their journeys to refuge, or would see this “movement” as genuinely transformative solidarity.

The ultimate goal of this campaign, raising money for UNHCR, comes at a time when the agency notes chronic underfunding for many of the operations around the world. Their budget is precariously dependent on states that themselves are hostile to refugees and flaunt international humanitarian law (with ~40% of the budget coming from the United States). It seems as though UNHCR is aiming to increasingly supplement their budget from donations by individuals. Patricia Daley has highlighted the ways in which humanitarianism is increasingly privatized and commoditized, presenting decontextualized solutions depending on stereotyped images of distant, suffering others, especially in Africa—in this case, could it be that part of the commodification mobilized is individual campaign participants’ own self-regulating fitness and fundraising efforts?

This campaign has aspects of “empathy experiments” previously highlighted on this blog. It asks people to aim for distances covered by people seeking refuge, and seems to fall short in the same way that many empathy experiments do.[iv] Sara states that “…the issue when there is a lack of caring and solidarity is not that we can't imagine the experience, but that we other the people having it. We distance ourselves from them in some way.” The campaign site does share stories of refugees’ journeys. To me the stories do not seem to move beyond the othering of those seeking refuge. They are very brief. They seem meant to be very straightforward and “understandable” without specific contextual understanding. Despite being from three very different places, all the stories follow the same structure. I wonder whether this mode of “storytelling” risks creating an undifferentiated “absolute victim” in which any one refugee (story) stands in for all.[v]

It is important that women’s voices and stories are heard on issues of forced migration. Only highlighting women’s stories in the context of raising awareness about dangerous refugee journeys may risk playing into the trope of women (and especially women with children), as ideal victims and objects of humanitarianism, and therefore other. Conversely, and equally from a gender perspective, I wonder about the choice not to include any men’s stories, particularly as refugee men are more often portrayed as threatening to security (and as men are more numerous among those trying to seek refuge in Europe, including through the Balkan route where they face increasingly violent pushbacks). 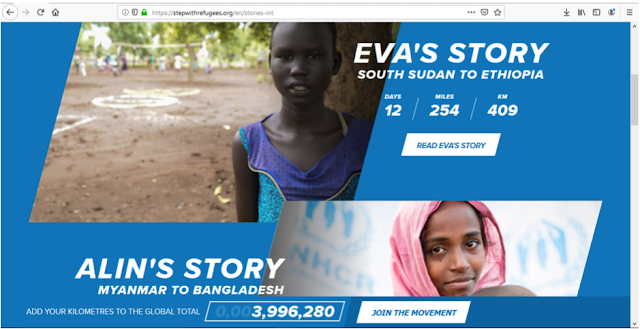 Further contributing to concerns about othering and reliance on “ideal victims”, “2 Billion Kilometres to Safety” only includes the stories of people seeking refuge outside of the (primarily Western) countries that seem to be the main targets of the campaign. Rather than challenging the racism and xenophobia faced by refugees, the militarization of borders, and externalization of asylum,  this campaign relies on the “better understanding” of the fact that most refugees are far away from those targeted by the “solidarity movement.” It creates “empathy” for a physically distant other. By focusing only refugee journeys, the campaign draws attention away from the often protracted immobilities that refugees often encounter. Immobilities may occur even prior to refuge, when trying to cross a border to seek safety. Having crossed a border, refugees may face strict encampment or detention, and/or policies and practices that restrict their movement and seek to contain them within host countries and in their regions of origin. Waiting, and seeking ways to continue to move, may be just as much a part of a journey as walking.

Giving more nuanced attention to refugees’ journeys, Polly Palister-Wilkins counters the common media use of the language of refugee and migrant “flows,” as if they were watery, natural forces, with attention to the physicality of the journeys of people walking long distances: they are “walking, not flowing.” She argues for attention to “the how of the journey—noting both the material and geographical aspects impacting and structuring how people move—and the physical impacts of that journey on the bodies of those on the move.” Polly writes, “I called attention to the travelers’ tired, blistered feet in an attempt to weave a thread between the material (and political) geographies of the journey and the embodied experiences of those making it.” “Step with Refugees” does recounts a few specific journeys, some of the geographical aspects structuring them, and the agency of people in seeking their own safety in difficult conditions. In spite of this it misses the important political aspect of “how people move” that Polly highlights. It ignores the “border, policing and transport infrastructures” that make mobility unequal for different populations, and seeking safety and liveable lives so dangerous for so many.

I do appreciate how “2 Billion Kilometres to Safety” emphasizes how people and families seek their own survival.  Nevertheless, I wonder whether the way that “perilous journeys” are highlighted risks suggesting that suffering in the journey makes some people more deserving of asylum and assistance than those whose journeys are less dangerous. Is someone who takes a bus to the border in seeking safety less deserving of solidarity? Does the highlighting of women’s strength in completing long distance, difficult journeys to refuge adequately counter the “ideal/absolute victim” trope? Or have resilience and agency simply become part of what characterizes the ideal, deserving refugee narrative in neoliberal times, and so are also required in the “solidarity” fitness efforts of campaign participants?
[i] The call to “Step with Refugees” is an adaptation of “Stand with Refugees,” the UNHCR slogan of the past few years, and which includes the incorporation of their most prominent hasthag, and the shortened version of the slogan, #withrefugees.
[ii] “Misconceptions about refugees” seems like a dramatic understatement of the overt racism and xenophobia faced by people seeking safety in many places around the world.
[iii] The video features actor Ben Stiller. For critiques of celebrity humanitarianism see Patricia Daley (2013) “Rescuing African bodies: celebrities, consumerism and neoliberal humanitarianism.” Review of African Political Economy. 40:137. https://doi.org/10.1080/03056244.2013.816944  and Katharyne Mitchell (2017) “Celebrity Humanitarianism, Transnational Emotion, and the Rise of Neoliberal Citizenship” Global Networks. 16:3 https://onlinelibrary.wiley.com/doi/abs/10.1111/glob.12114
[iv] Rebecca Clouser and Jenny M. Rickley have also done work specifically on “endurance philanthropy,” aspects of which seem relevant to the distance challenges of this campaign, even as it directly seeks to address forced migration. See https://aag.secure-abstracts.com/AAG%20Annual%20Meeting%202019/abstracts-gallery/20269
iv The term “absolute victim” comes from the work of Michel Agier, including Agier, M (2010) “Humanity as Identity and it’s Political After-effects.” Humanity 1:1 http://muse.jhu.edu/article/394858

Great piece! But you should check the spelling of one of references. It should be Jillian Rickly.
Rickly, J. M., & Clouser, R. (2018). Spectacle and adventure philanthropy. Annals of Tourism Research.